Looking for an awesome last minute DIY halloween costume idea? Check out this easy zombie makeup tutorial and DIY zombie costume where I show you step-by-step how to dress up the whole family like zombies for Halloween! 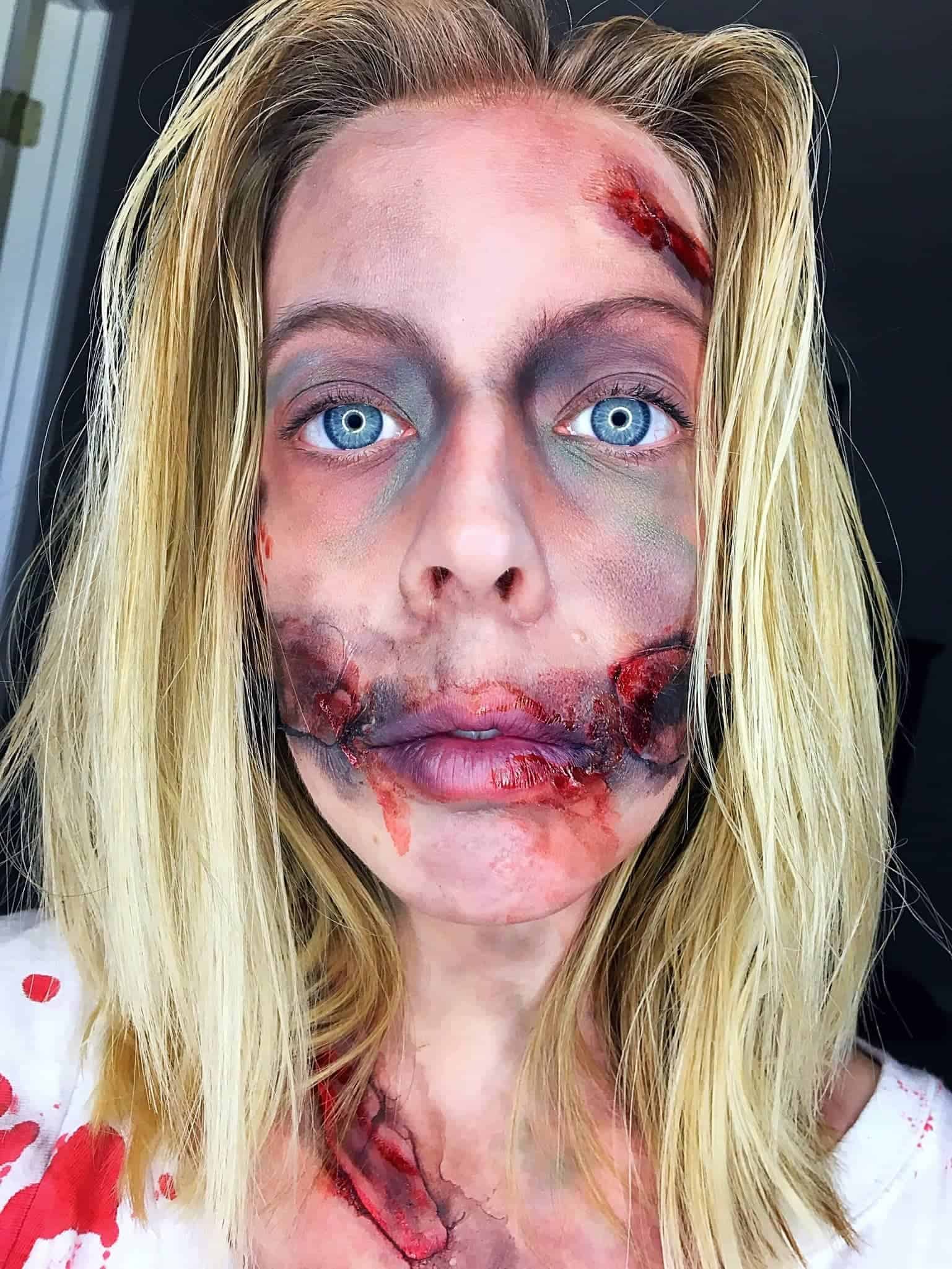 Hey hey friends, Happy Hallow’s-eve! Hope everyone had an amazing weekend! Today’s post is a fun halloween tutorial where I’m showing you how to DIY zombie makeup and a zombie costume.

Our boys wanted to be zombies this year, so instead of fighting it, my hubs and I decided to join in on the fun and dress up as zombies as well. But in lieu of spending $40 a pop on costumes we’d probably only wear once, I set out on a mission to DIY our looks instead and I’m so happy with how it turned out!

(If you haven’t yet checked it out, be sure and pop on over and watch my Cute and Easy Raccoon Mask Halloween Tutorial) 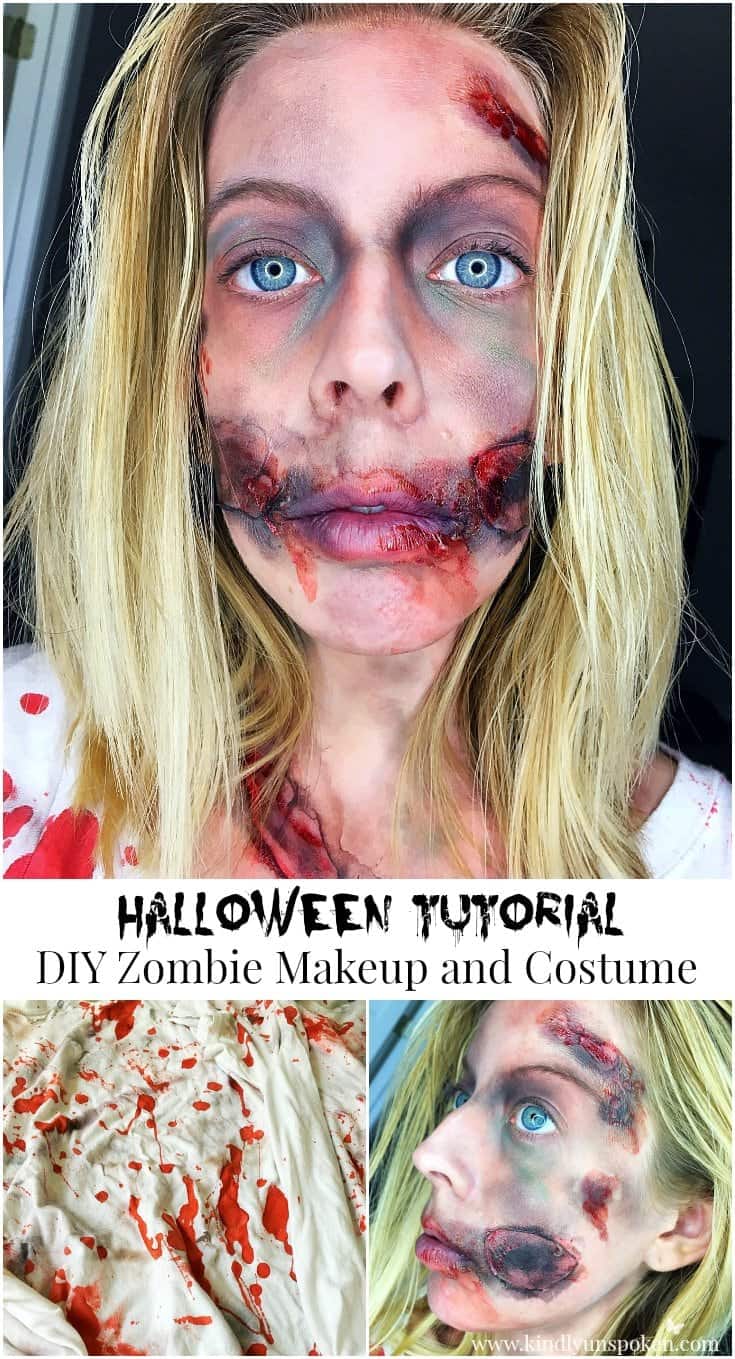 How to Create Your Halloween Zombie Costume Step-By-Step

For the Halloween zombie costume, we picked up some white long-sleeve t-shirts for the boys at Wal-mart for $3 each and my husband and I just used a couple of old white t-shirts he already had.

The boys had a blast helping me make our zombie costumes and it was so incredibly simple! 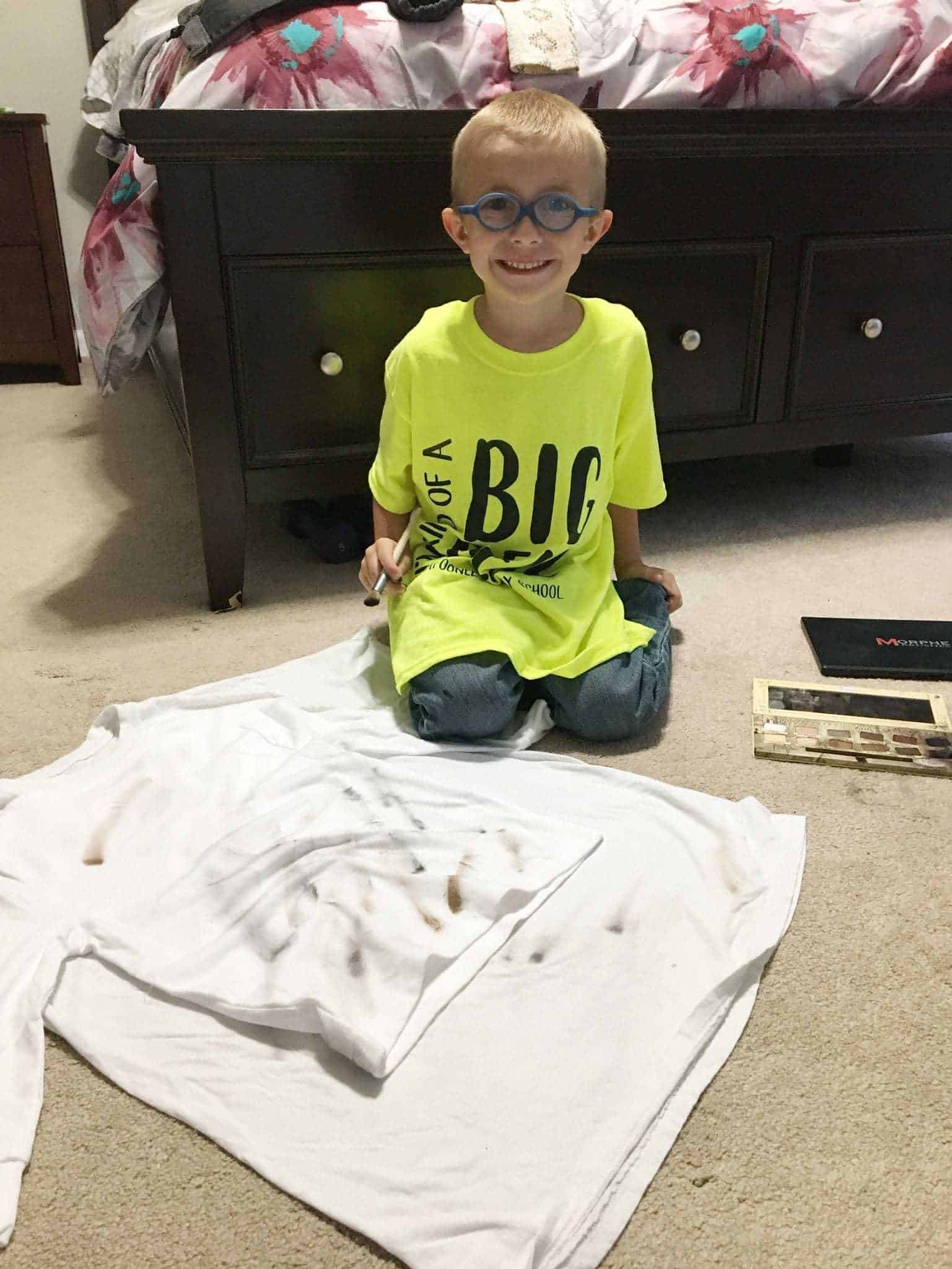 The boys really enjoyed this part because they had full freedom in being as messy as they wanted. 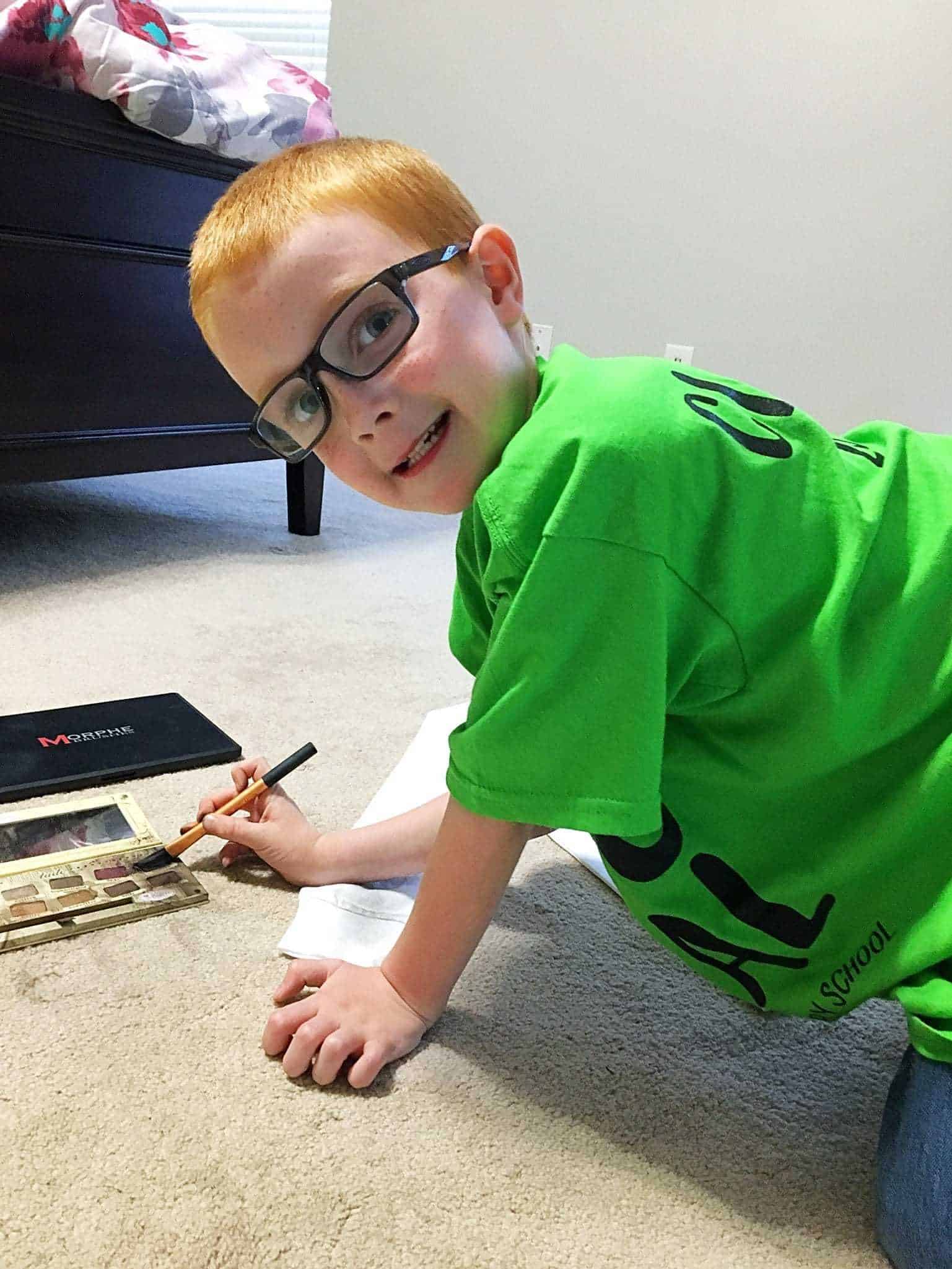 To give it a nice zombie touch, I dipped each of their finger tips in the black and had them slide their fingers down the edge of the shirt.

Step 2: After making the zombie shirts look super dirty, I next wanted to create the worn look so I had both the boys put on their t-shirts and went to town with a pair of scissors.

I carefully cut small slits and frays on the shirt’s neck collar, sleeves, and bottom, and even added a fun off the shoulder detail on mine. Hey even zombie girls gotta look stylish, amiright? 😉 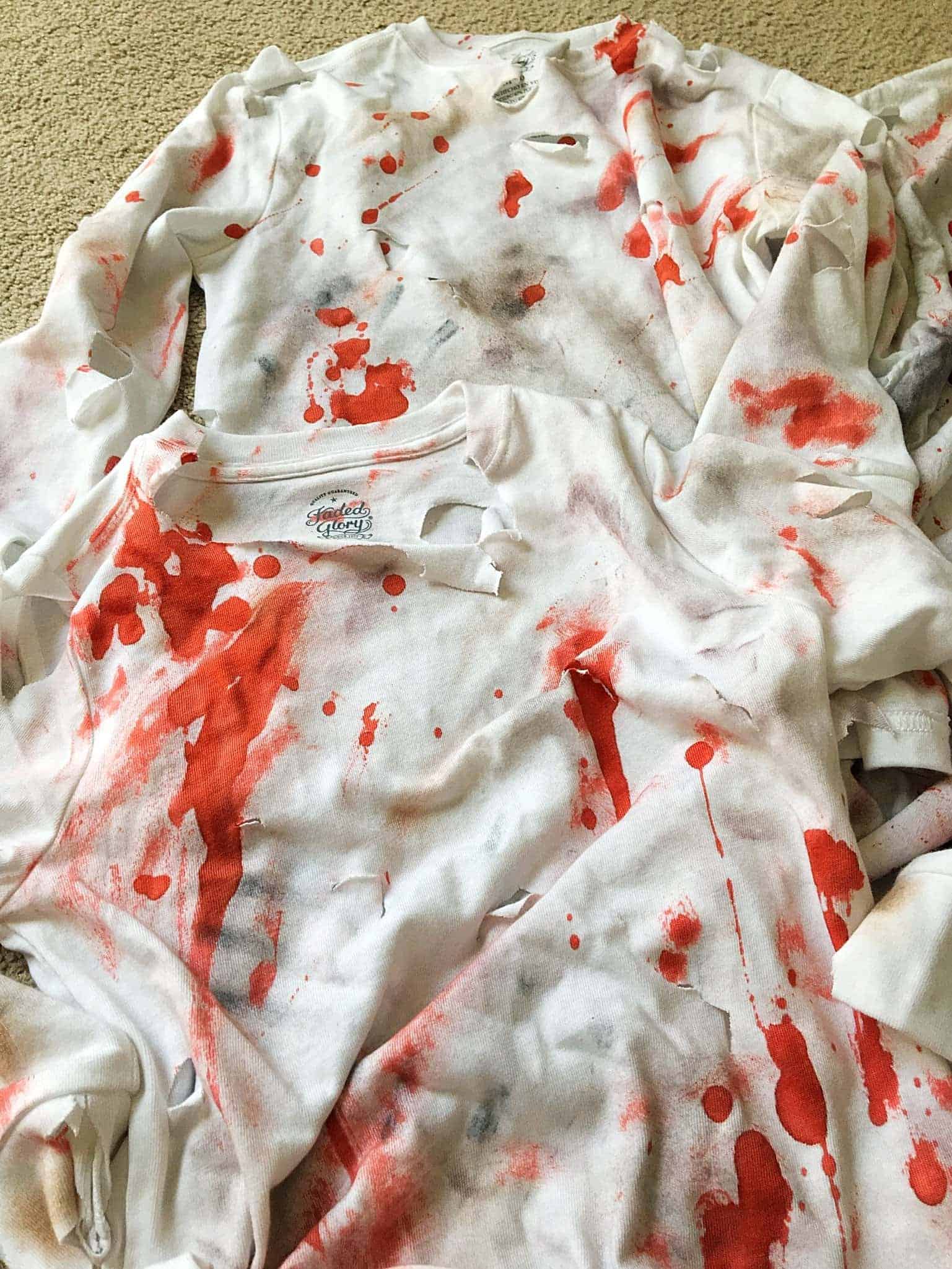 Step 3: Last but not least, using a bottle of fake blood like this one, I had a blast decorating the shirts. I first just carefully poured out blood streams in various spots on the shirt, and then used a plastic spoon and toothbrush to add gory, blood-splattering detail.

Although I felt a bit like Dexter while doing this, the fake blood added the perfect finishing touch to our t-shirts. FYI: This part can be a bit on the messy side, so I definitely recommend doing it in your garage, outside, or putting a towel or sheet down to catch any mess. 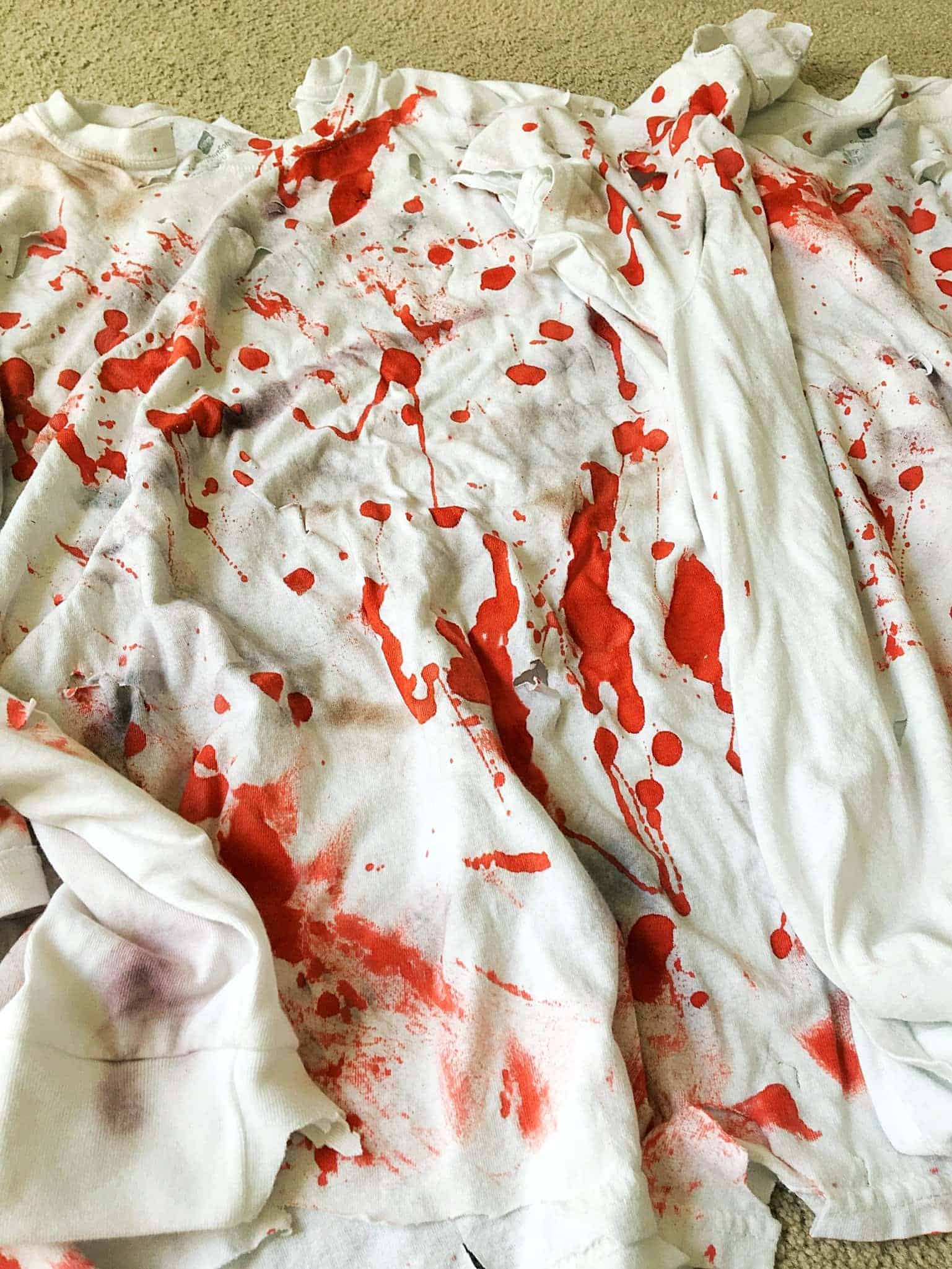 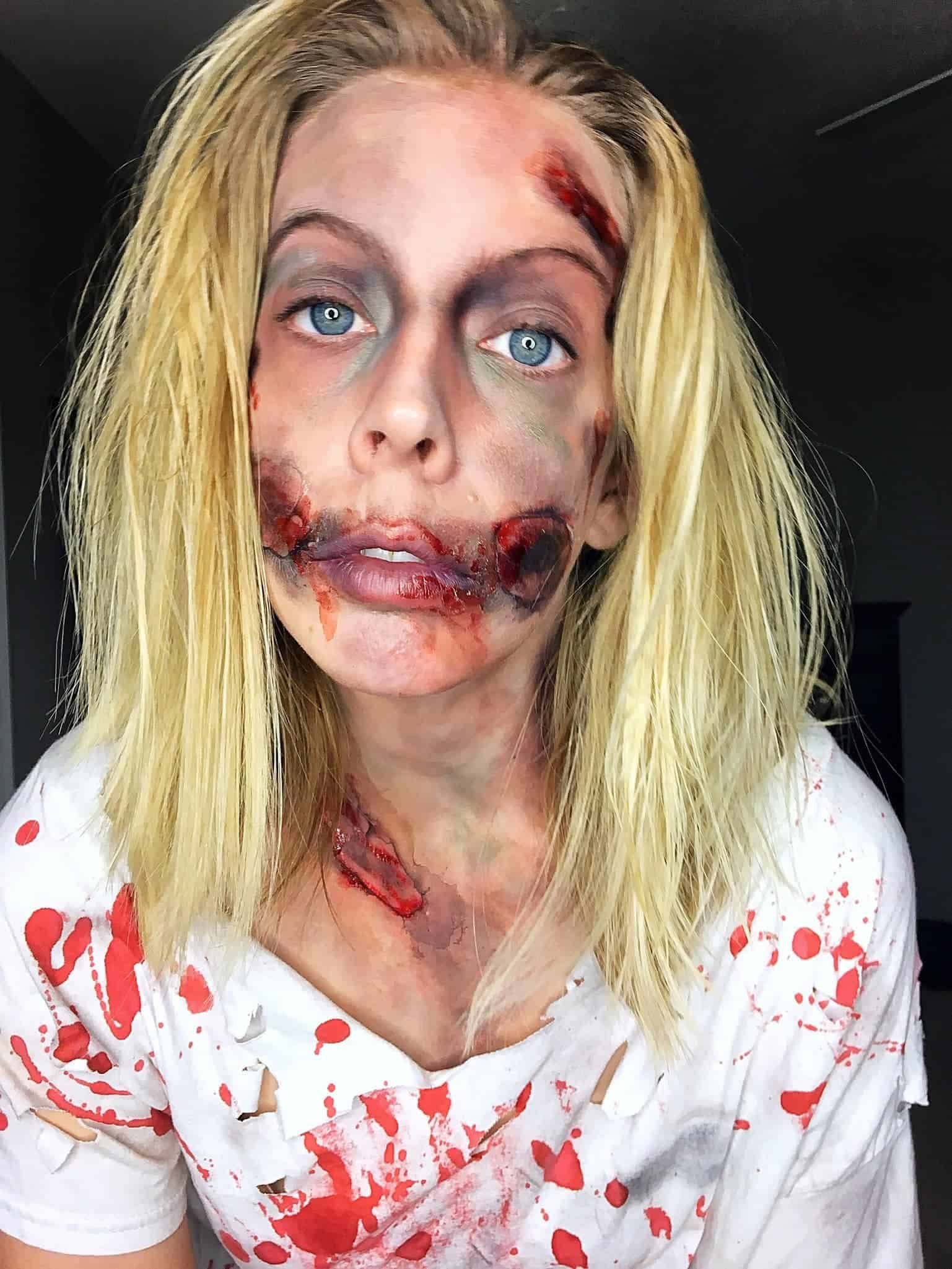 How To Create Halloween Zombie Makeup

Zombie Makeup Step 1: Use Eyeshadow to Dirty Up the Skin

First things first, you’ll want to dirty up the skin to get an authentic looking zombie face.

For my zombie makeup look, I kept it pretty simple in dirtying up the face with the same black, brown, and burgundy eyeshadow shades from this palette that I used on the t-shirt, and worked this into different crevices on my face, neckline, and shoulder.

I went for a more realistic zombie makeup look, incorporating shades on my skin to give myself that authentic “half-dead” look.

To make my eyes look a little bruised I incorporated a little bit of deep purple and green around the eyes.  I also used some light gray cream makeup on my lips. 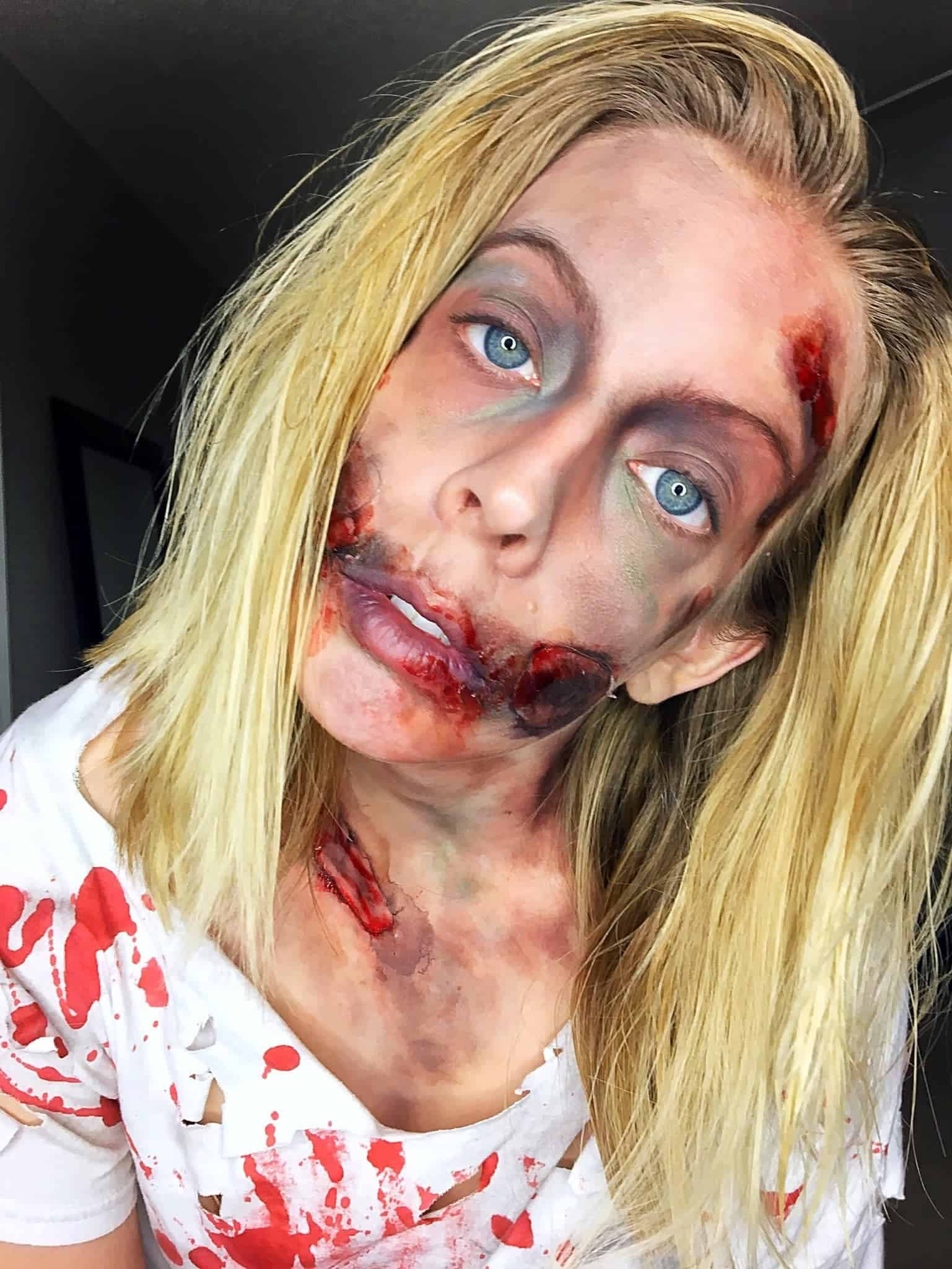 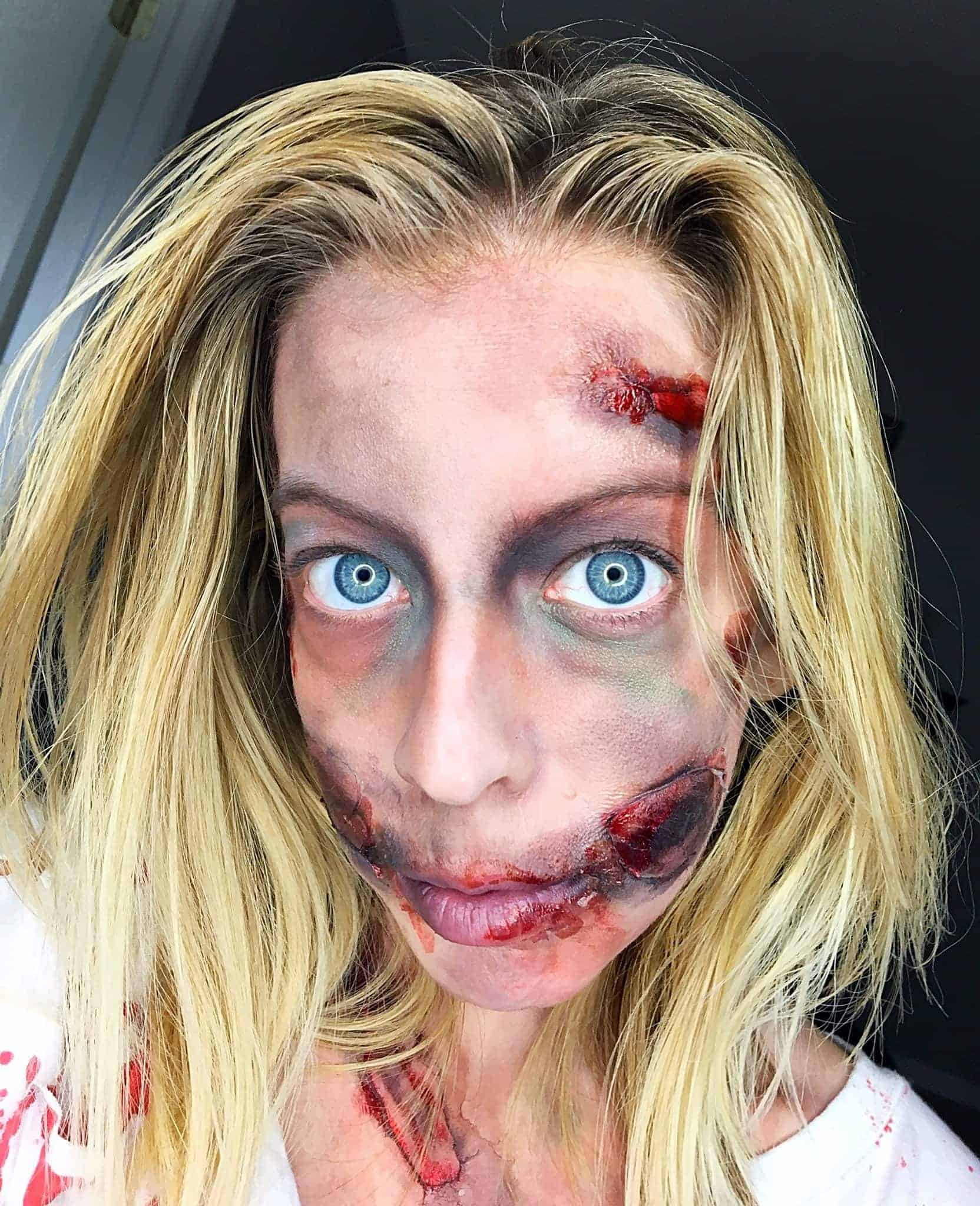 Next, I used this liquid latex and applied 2-3 layers around the mouth area, on my forehead, and neck. After I let the liquid latex dry, I carefully peeled back the area and deepened the “zombie wounds” with black and burgundy eyeshadow.

Last but not least, I added in elements of fake blood gel on the wounds and around my mouth and chest. Although this is completely optional, I also added in some of my favorite coconut oil to my hair to make it look extra greasy and zombie-like (haha). 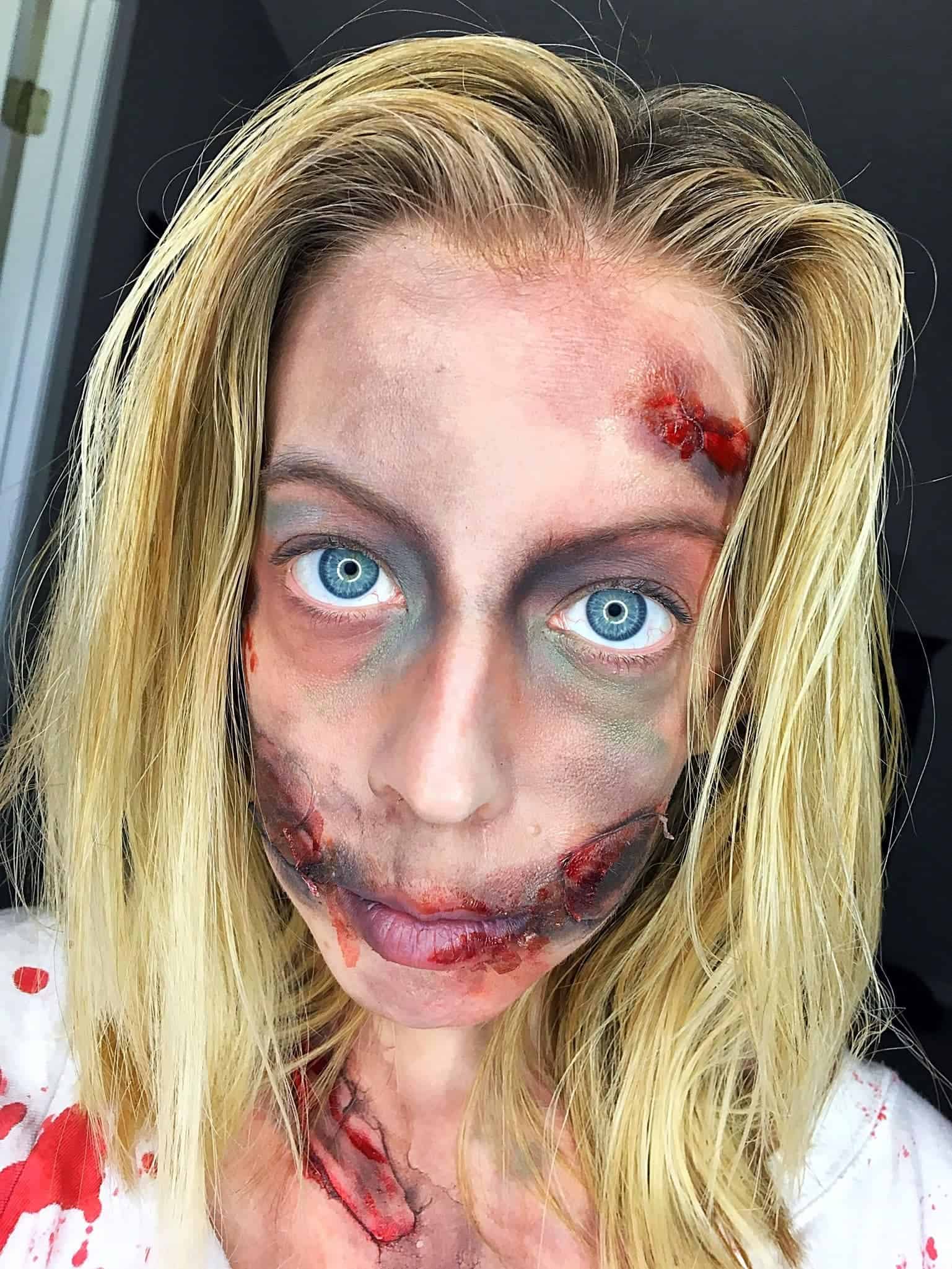 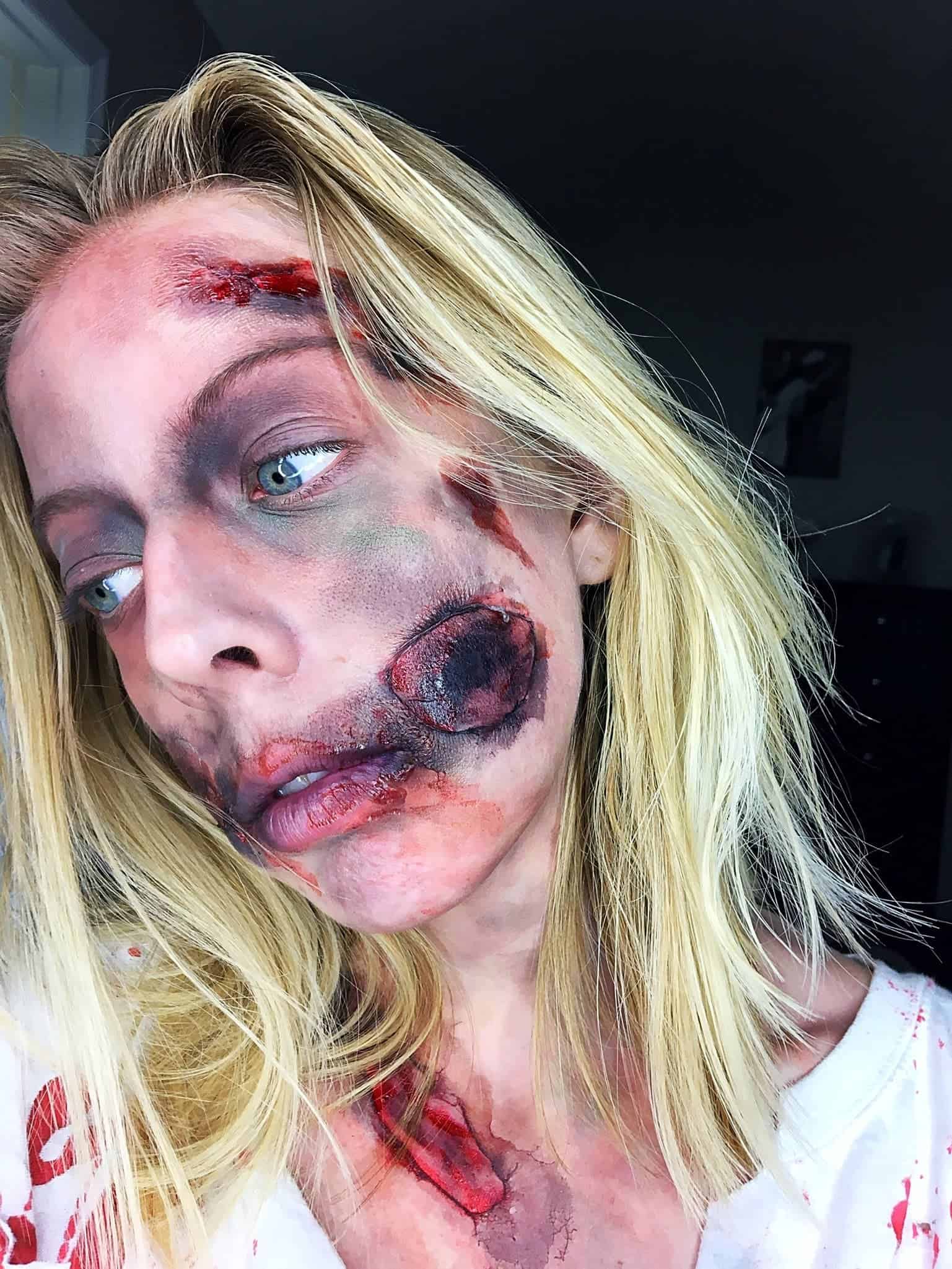 This zombie makeup and zombie costume was such a FUN look to create and I’m loving how it turned out! It honestly only took me a total of like 10 minutes to create the zombie makeup, plus our DIY zombie costumes saved so much money in comparison to buying individual costumes and all the little fake zombie makeup pieces. Although I might be biased, I’d call this Halloween zombie DIY a success!

Here’s our crew all decked out in our zombie costumes and zombie makeup. I seriously love it and I think our family looked like the best zombies around! 😉 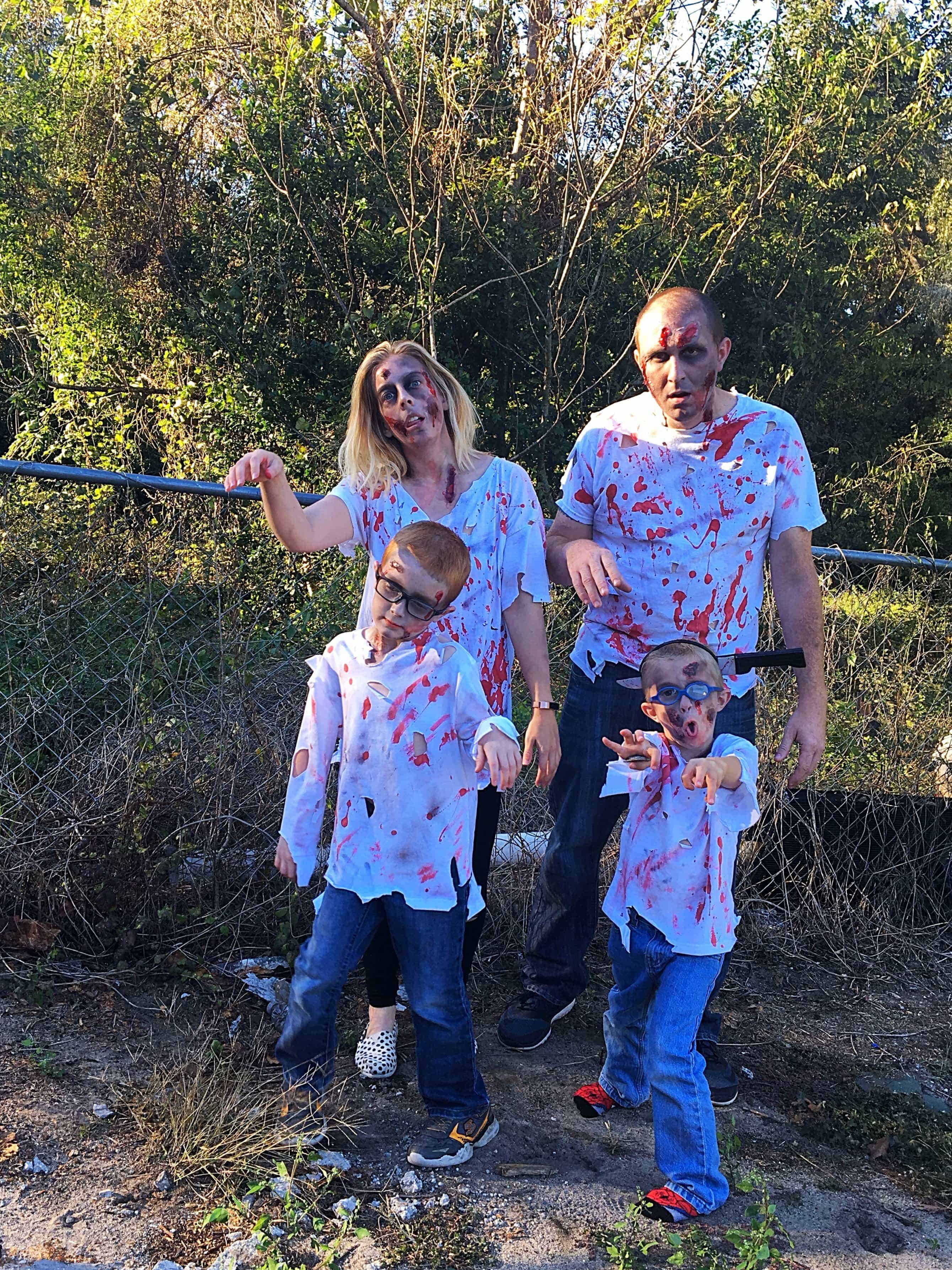 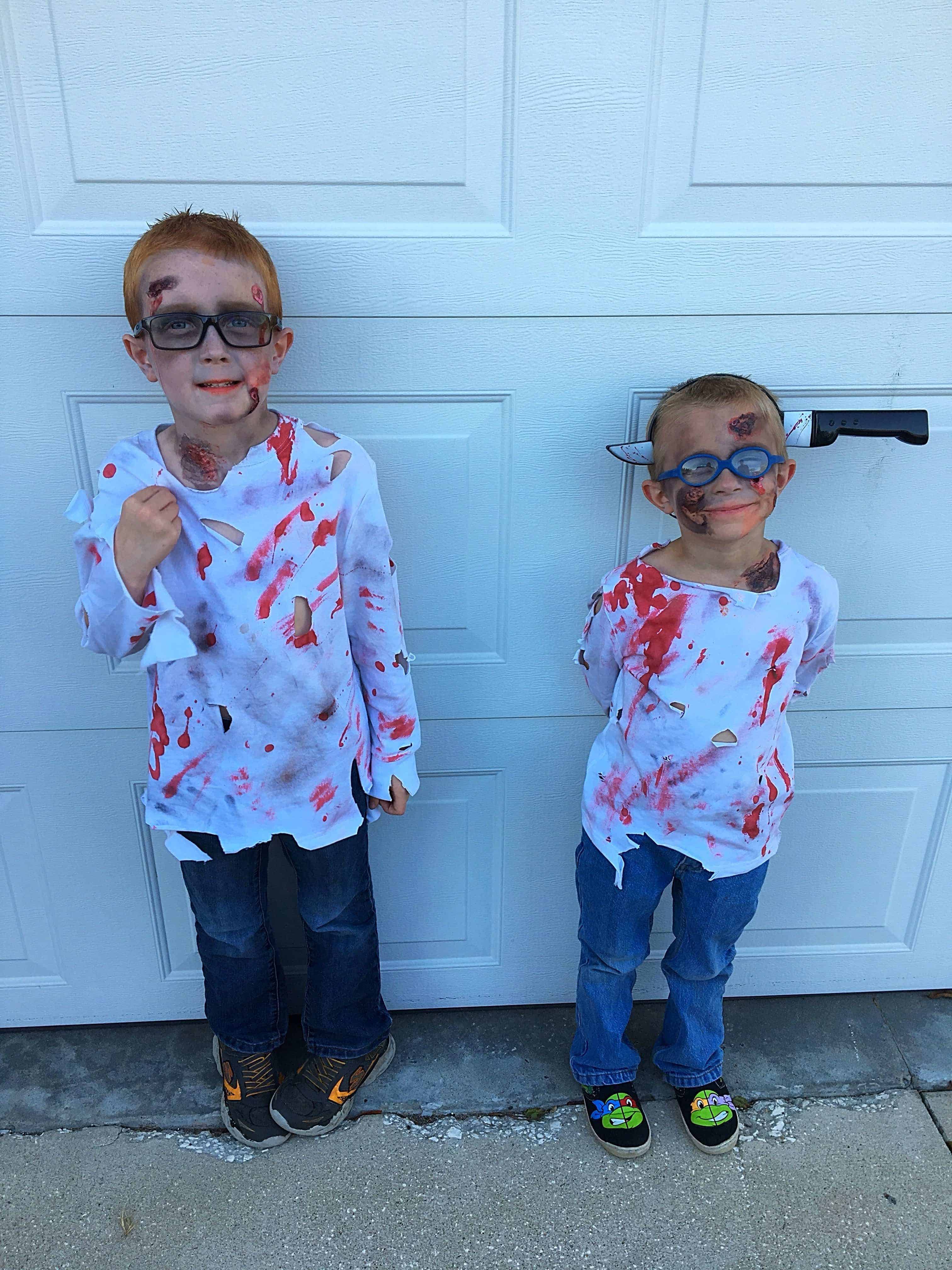 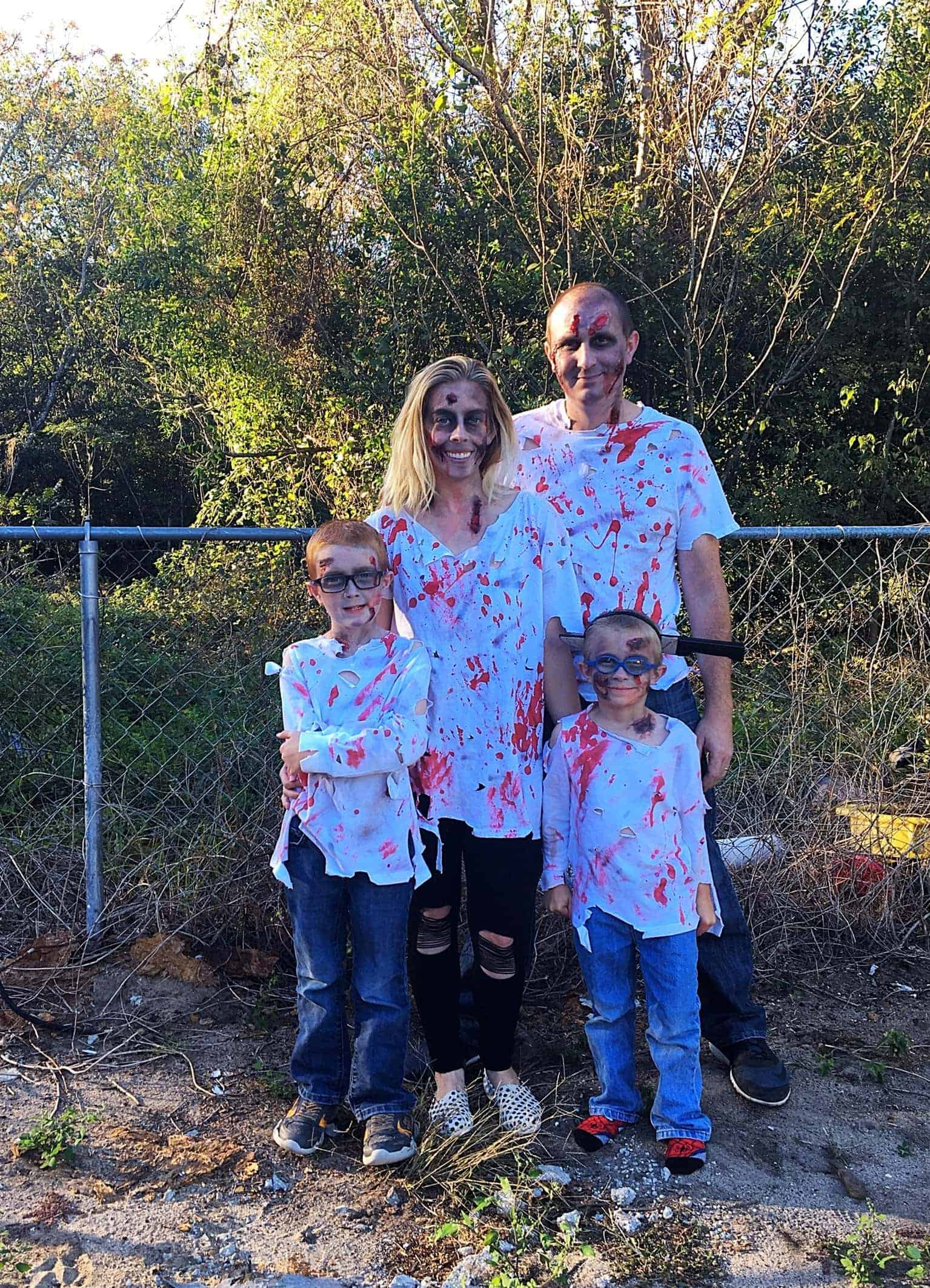 I hope you enjoyed today’s Halloween Zombie Costume and Zombie Makeup Tutorial! What do you think of our DIY costumes and my zombie makeup? Are you a fan of DIYing costumes?

Happy Halloween Everyone! Thanks for stopping by! – Cara 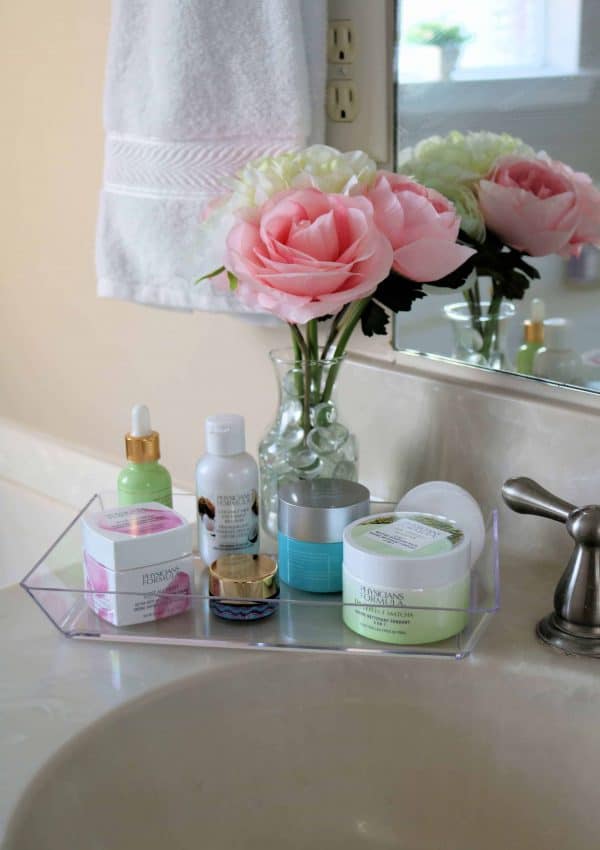 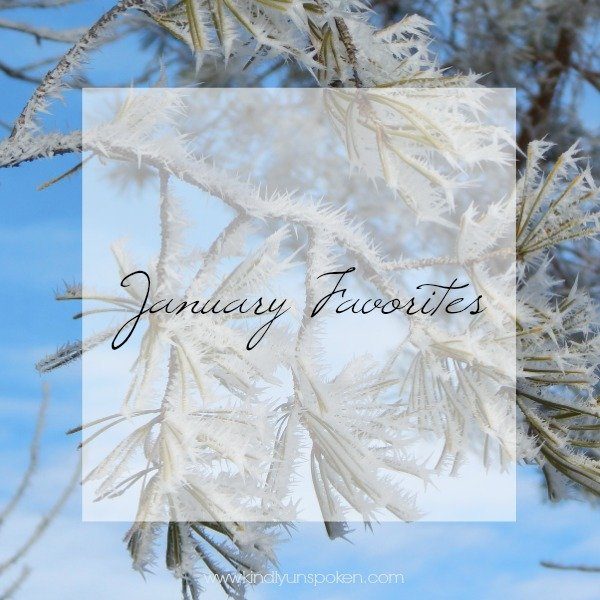 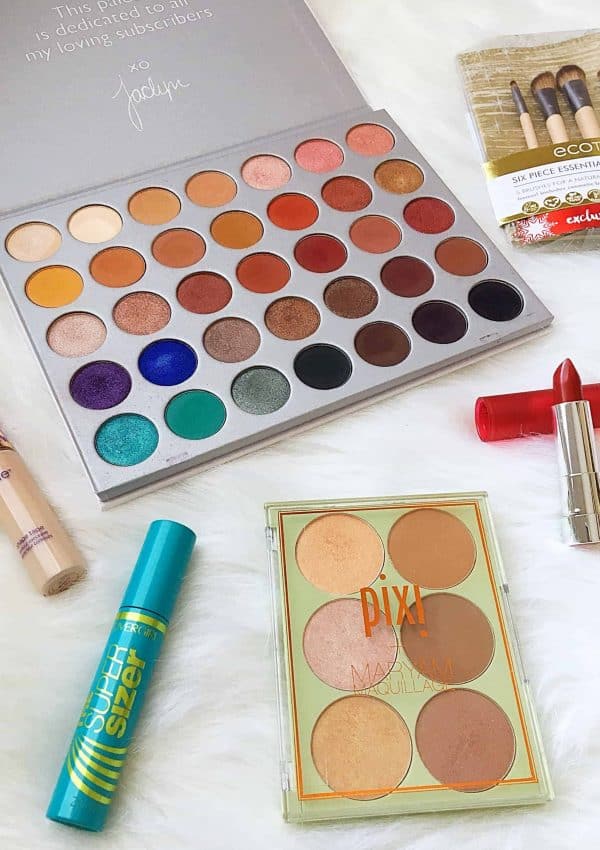 20 Christmas Gifts for the Beauty Lover 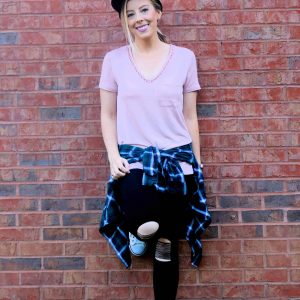 5 Tips for Rocking the Athleisure Trend